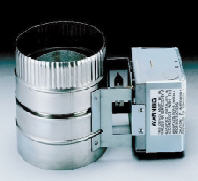 Gas fired furnaces, boilers and water heaters require a flue that has a good draft in it to get rid of the products of combustion after most of the heat has been removed. Newer appliances have fans and are called ‘forced’ or ‘induced’ draft venting. Older equipment and most boilers still rely on natural draft.

The problem is that the draft is occurring 100% of the time, sucking air out of the house, even when it is not necessary to remove flue gases (when the burner is off). A vent damper is an automatic devise that shuts off the flue pipe when the burner is not running.

A vent damper has no effect on the running efficiency of the appliance. It only saves off-cycle losses of heated air. Therefore, if the appliance is in an unheated space, there is no benefit to a vent damper.

A vent damper can achieve up to 10% annual fuel savings.

There are two types of vent dampers: electric and thermal.

Thermal Vent Dampers
A recent web search could not return a single source for thermal dampers. Although thermal dampers may still be available and many are still in service, they are not as efficient as the electric dampers and were often the target of critics for the amount of “flue gas spillage” they could cause. (Spillage is when flue gases come out the draft hood rather than going up the flue.) The thermal dampers were much less expensive and could be installed by a do-it-yourself person. They are heat activated and very simple in design and operation. However, they are slow in opening and closing and some designs resulted in a permanent flue restriction.
Electric Vent Dampers
Electric vent dampers have a small electric motor that drives the damper. It is spring loaded such that if the electric power or the motor fails, the damper will fail open. The damper motor is wired in with the gas value. When the gas valve opens and the burner ignites, the vent damper opens. When the burner is shut off, so is the vent damper. The highest value heat is saved soon after the burner shuts down, when the heat exchanger and the flue are the hottest and the draft is the most severe (when the chimney is sucking out most of the hottest air).

Although vent dampers are still available, a furnace old enough to benefit from one should be considered for replacement. New furnaces, even the non-condensing units, have smaller flues, forced draft, and no open ‘draft hoods’, which means they loose less up the flue. Also, a vent damper could interfere with proper forced draft operation so it should not be installed on many newer furnaces. (Check with the manufacturer before installing a vent damper on any forced draft furnace.)   Furnaces with a lot of ‘life expectancy’, that have open draft hoods (open area at the base of flue), and are located in conditioned spaces, should be considered a good candidate for a vent damper retrofit.

Vent dampers are more applicable to boilers, as even newer boilers do not have forced draft ventilation and still use draft hoods. 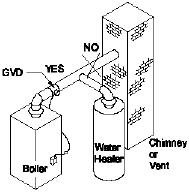 The Field Vent Damper works automatically to allow natural draft during appliance operation while preventing residual appliance heat and conditioned air from escaping during off cycles. It also prevents the infiltration of cold air during down drafts. It’s made of stainless steel and is available in 8 sizes, 4″ through 12″.

Dual safety switches allow the burner to fire only when the damper is in the open position. This unit will not interfere with existing appliance safety controls, when properly installed.