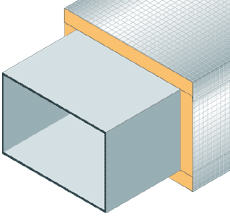 Furnace and Air Conditioning Ducts (and Boiler Pipes) that run through unconditioned spaces (crawl spaces, attics and unheated basements) should be sealed for air leaks and insulated.

Use silicone caulk to seal all the ductwork joints on and near the furnace; this will help make the furnace fan more efficient and increase the pressure in the ductwork to the entire house. Standard cloth (gray) duct tape is no longer recommended for sealing ducts; foil-based taped that is UL labeled for use on metal ducts is now the standard recommendation. This type of tape will last longer, especially if there is any exposure to sunlight. There are also mastics, that look like the old-fashioned plaster materials used on boilers years ago, but it doesn’t contain asbestos. This material comes in a bucket and is brushed or troweled-on. It creates a great, permanent seal, but can be very messy so is usually used where the ducts will be concealed.

Houses that receive the ENERGY STAR Rating must have their ducts sealed, even if all are running through conditioned space. Sealed ducts result in better balance and air control in the system.

Standard metal ductwork has a VERY low R-value and generally is not all that air tight. It easily looses heat (and cool) to the space that it runs through. When that space is an area that does not require intentional heating (cooling), then insulation makes sense. There could also be benefit in insulating and sealing the ducts to improve comfort and distribution efficiency. If the rooms furthest from the furnace are always the coldest (hottest) then it could be because there is too much loss from the duct work.

CAUTION: Be aware of water pipes that may run in the same space as the ductwork, mainly in crawl spaces. Insulating the ductwork and stopping the heat loss could result in dropping the space temperature below freezing, which could lead to frozen and damaged water pipes. If there are water pipes in a crawl space, it is better to insulate the perimeter stem walls. See Floor and Crawl space Insulation 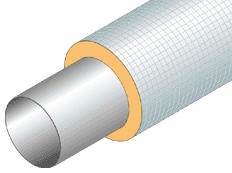 Ductwork should first be sealed of air leaks, and then insulated with at least   1 1/2″ of fiberglass batt insulation designed for ductwork.

Common duct tape works well to seal air leaks, but metallic tape will last longer. Conventional duct tape will rapidly deteriorate if exposed to sun light. Silicone caulk works well, especially on angle joints and the many joints on and near the furnace where it would be difficult (and ugly) to use tape.

Close and seal all registers in the furnace bonnet (large metal box connecting the furnace and ductwork) and in the supply and return air ducts that are very near the furnace; these registers “short-circuit” the air flow close to the furnace and reduce the air flow from/to the rest of the house. Also, return air registers close to the flue pipe can result in flue gas products being sucked into the ductwork instead of going up the chimney. Especially at furnace start-up when the chimney is cold and draft is the weakest.

Insulated ductwork is available in rigid board style and tubular fiberglass. Codes will vary on its legal use for residential, but generally insulated ductwork can only be used for short lengths and/or where it will not be exposed to damage (such as in attics). It is more commonly used in commercial applications above suspended ceilings.

Commercial grade metal ductwork may be insulated with fiberglass on the inside; this is rarely used for residential. In commercial applications it is more commonly used for sound-dampening than for saving energy.