Concrete walls have about the same R-Value as a single pane of glass. The fact that they are below grade doesn’t add much insulation value until well below the frost line – dirt is not a great insulator – dirt freezes! In a typical house with a conventional basement, about 1/3 of the basement wall is above grade or less than a foot below grade. In an otherwise well insulated house, bare concrete basement walls represent the single largest heat loss area of the house envelope.

When and Where to Insulate 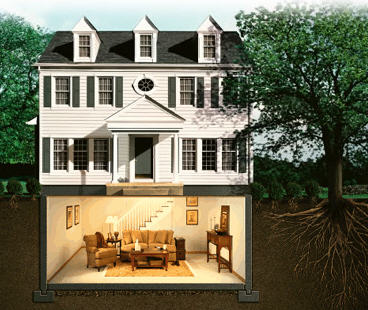 Retrofit
Insulate basement walls on the inside when finishing interior space.
New Construction
Insulate on the exterior with rigid foam at the time of construction, or consider a basement wall system that includes insulation as an integral part of the wall. Such as: 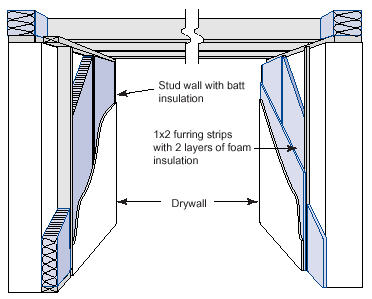 The mostly effective way to insulate existing basement walls is to build a stud wall inside of the concrete wall and insulate the stud wall. Using a 3 1/2″ stud will allow R-11 fiberglass batts. Using 2″ furring strips NAILED will allow R-10 rigid foam.

Systems that include gluing foam directly to concrete and then gluing a finish material over the foam generally do not hold-up.

It is against most codes to simply glue foam onto a wall and leave it exposed. Exposed foam is a fire hazard. The exception are foam board insulation with a heavy foil or other 15 minute fire-rated surface.

If there is any chance water could come through the concrete wall, steps must first be taken to reduce the potential damage from leaking water.

A new system developed and being promoted by Owens Corning uses pre-finished insulating panels. See the link to their web site below for more information. 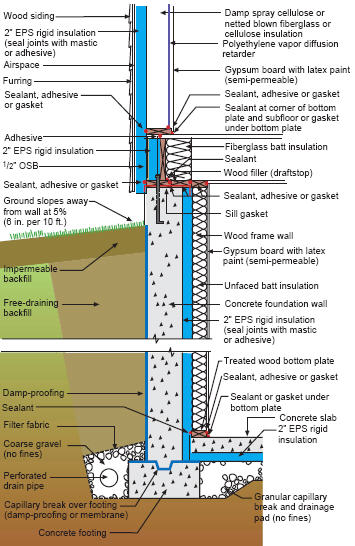 NOTE: The use of a vapor barrier on the inside (warm) side of walls has been a controversial issue for many years. The use of a vapor barrier and where it is placed has MANY considerations – but mainly the climate, the soil conditions and the method of construction. For a thorough discussion of the various methods to insulate a basement wall, see the paper from the Building Science Corporation

No basement wall, or any other building component, should be insulated if there is a problem with water leaks. The added problem with basement walls is that they are the most prone to leaks and therefore need the most consideration.

The most effective way to install basement wall insulation is to use rigid foam on the outside of the concrete wall at the time of construction. The portion of the foam that is above grade must be protected from impact and UV degradation. The easiest way to do this is with a brush or trowel on stucco material applied directly to the foam.

New Building Energy Codes requrie at least 1″ to 2″ of rigid foam, that provides R-5 per inch, depending on the Climate Region where the house is being built.

There are also basement wall assemblies that come ‘pre-insulated’ or ready to insulate. Pre-cast concrete slabs are made with rigid foam on the inside. Wood basements are ready to insulate stud walls. There are several foam block systems that involve some sort of stacking foam and then filling the cores with concrete and troweling on a surface coating of concrete or mortar. All of these systems have various pros and cons, but from an energy standpoint, they are all better at insulating than a bare concrete wall. 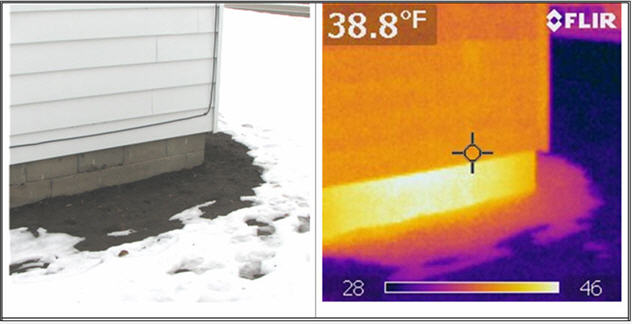 This IR Image clearly shows the heat loss from the uninsulated basement wall.
Of course so does the visual image from the snow melt! 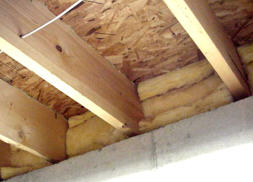 The Band Joist, also known as the Rim Joist, is the outside perimeter around the floor joists. (See Photo) The band joist is an easy place to insulate because it is open and accessible. It is insulated by cutting short lengths of R-19 fiberglass batts and stuffing between each floor joist, before finishing the basement ceiling.

NOTE: in some conditions there can be high build-up of water condensation in an insulated band joist. A small amount of condensation is probably normal, and will dry out when conditions reverse. However, to reduce the volume of condensation, the framing materials should be air sealed and an exterior foam sheeting used. The best way to insulate band joists is with direct-applied spray foam. The spray foam should be the type that both seals air leaks and resists moisture transmission.

For more information about band joist insulation, see the linked document above on basement wall insulation from the Building Science Corporation. 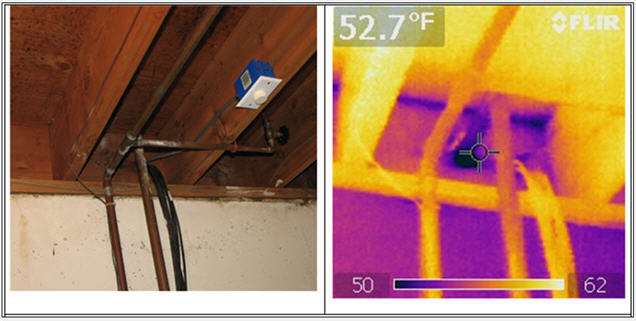 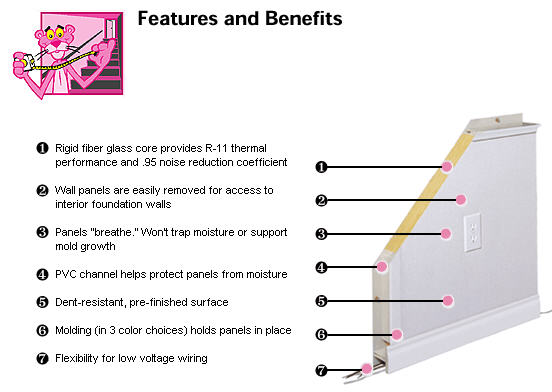 For information about do it yourself projects, see www.doityourself.com/insulate/insulatingfoundations.htm