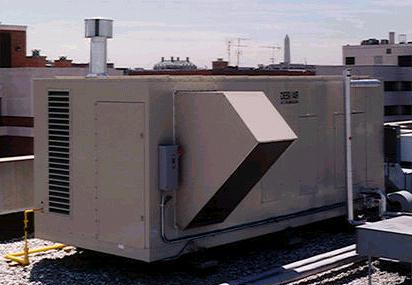 The Sensible Load is the temperature component; the Latent Load is the humidity portion. When moisture laden air passes over a cold surface (cooling coil), the air temperature drops below the “dew point” which causes the moisture to condense. The air has then been cooled and some of the moisture removed.

Just as it takes 970 BTUs to vaporize a pound of water (the Latent Heat of Vaporization), for every pound of water vapor condensed, 970 BTUs is given up. Typically, latent loads are at least 30% of the total cooling load. Higher in some applications and humid climates.

Conventional air conditioners drop the relative humidity down to about 45% at best. However, spaces that tend to be cooler to begin with, such as supermarkets, ice arenas, and water treatment plants, need to have a lower relative humidity as moisture will condense on the cool surfaces of the building or its contents.   Also, some manufacturing processes require a very dry air, such as dry food and powdered medicine packaging, where product sticking together can be a real problem.

With conventional air conditioning, the option is to super cool the air – virtually freeze the moisture out of it, and then re-heat the air. This is a very energy intensive (expensive) method, and still does not achieve a low enough relative humidity at certain times of the year.

The energy used by desiccant dehumidification units is for the fans to move the air and for the heater that heats the reactivation air (see below). The thermal requirements for reactivation air is quite small. Even on large units, there may be only a 500,000 BTU/Hr direct fired burner. This is why many small units are all electric. Also, units may only be used on a seasonal basis. Therefore, annual gas sales to desiccant dehumidification units are not very high, but they can provide tremendous operational advantages to facilities and processes that need them.

The desiccant system uses special materials that “adsorb” the water vapor, rather than condensing it. The desiccant is then heated and vented to drive off the moisture and the adsorbent process is repeated. With these types of systems, very low (as low as 5%) relative humidity can be achieved. As this process alone does not involve cooling, space temperatures remain more comfortable. Actually, the air coming out of a desiccant system is warmer than when it went in; if sensible cooling is required, a conventional air conditioning system (reduced in size by up to 30% because the latent load has been removed) can be installed down stream of the dehumidifier.

Desiccant material, in the most popular/common units, are crystal like materials installed on a rotating wheel.  Most of the wheel is exposed to air that is being dehumidified, while a portion of the wheel is being “regenerated” by a heat stream. The heat can come from a direct fired gas burner, an indirect fired water or steam coil, or electric elements. New CHP (Combined Heat and Power) Systems are using microturbine exhaust to regenerate desiccants.

Process Inlet is the air to be dried. It may be outside air, inside air, or most commonly, some mixture of air with a high humidity content. About 3/4 of the wheel is exposed to the process air, which is also the cfm rating of the unit.

Process Outlet is the air that has been dried by the desiccant wheel. It may also be cooled, filtered or otherwise handled by additional processes before it is delivered to the space. The RH (relative humidity) has been substantially lowered and the sensible temperature slightly raised by passing through the wheel.

Reactivation Inlet is the air flow that drives the moisture off the wheel. It is probably outside air, depending on the location of the unit. The Reactivation Air must be heated. This is where the energy source may be direct-fired natural gas, steam coils, electric resistance coils, or some other heat source matched to the load such as microturbine exhaust. About 1/4 of the wheel is exposed to the Reactivation Air flow.

Reactivation Outlet is the hot, wet air coming off the wheel. It is dumped to the outside as exhaust air. In some systems, the Reactivation Air passes through an air-to-air heat exchanger before it is dumped. The heat exchanger pre-heats the incoming Process Air. In northern climates, this can add substantial operating savings.

Kathabar is a large manufacturer of liquid desiccant units. (see below)

Desiccant units are rated in CFM air flow, NOT tons of cooling.

Desiccant system first cost cannot compete with conventional air conditioning on a cost per moisture unit removal basis; the application must require a lower relative humidity than the conventional system can provide before a desiccant system would make sense.

Facilities with large refrigeration loads such as ice arenas, cold storage warehouses and grocery stores can also reduce the operating cost on the refrigeration equipment, as less condensation goes into the ice/ frozen product.

Generally, the motivation to go with desiccant will be:

NovelAire is working on a small-scale desiccant dehumidification unit for use in large houses or small commercial applications – such as a chain-food restaurant. What their web site for more information. 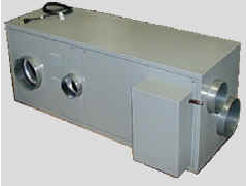