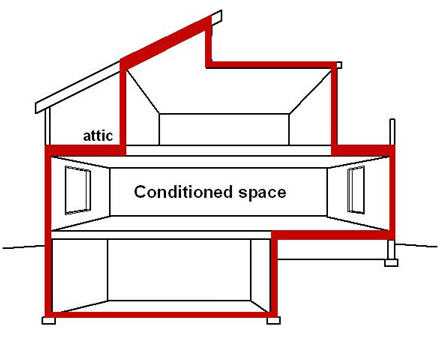 To determine how much emphasis to put on the building envelope from an energy management perspective, first consider the amount of energy, as a percentage and in total dollars, that the envelope is estimated to represent. If the percentage is very low, the building occupant may not be too motivated to undertake envelope measures. However, if the dollars are high enough, envelope measures should stand on their own merits and get some attention.

Other reasons to consider the building envelope are for aesthetics, structural integrity, security, comfort and function. Often one of these higher-priority motivators will allow energy management measures to be considered at the same time.

Consider each component of the building envelope both individually and as a total building. For example, the windows may be single pane and leaking lots of air. If the facility has high internal gains from an industrial process or lots of powered ventilation that turns over the air, then it doesn’t really matter. In another case, an old factory has been converted to warehouse space, and sealing up the old drafty windows could represent a major part of the building’s heat loss.

On commercial spaces, the focus tends to be on comfort, quality windows and doors, and things that have a positive impact on aesthetics that might also have some energy management benefit. Therefore, it may be possible to do some building envelope improvements in combination with renovation for other purposes.

In industrial facilities, the focus tends to be on function. They are likely to be less interested in aesthetics and more interested in safety and getting the product out the door. If a roof is leaking and damaging product or machinery, they may replace it and add insulation at the same time. It’s highly unlikely that roof insulation would be added to save money on the heating bill, as the primary motivator. An inspection of the building envelope should mainly look at reducing unintentional infiltration, and only then if the reduction makes sense in the ‘bigger picture’ – such as a building with minimal power ventilation and/or unoccupied periods where power ventilation is shut off and there would be an advantage to tightening up the building.

For details on individual components, see the links below: