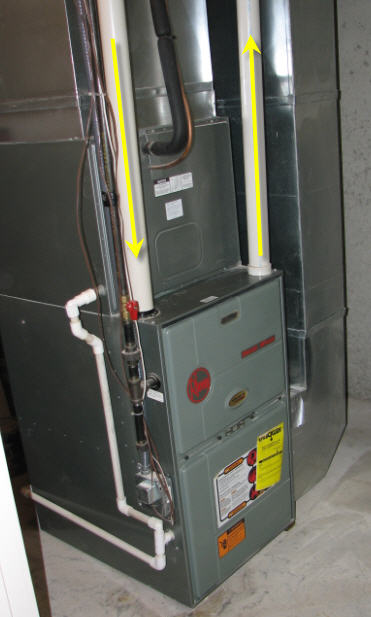 Where natural gas is easily available, the forced air furnace easily dominates the space heating market; the colder the climate, the higher the percentage of dominance.

Great improvements in efficiency have been made over the last 20 years. Any furnace less than 80% efficient or more than 20 years old, is a candidate for replacement.

For any house that is at least modestly insulated, replacing a 20 year old furnace is likely to be the largest single energy management measure that can be taken to reduce heating costs.

Efficiency has at least two ratings:

The above rankings clearly show the best way to reduce total heating costs is to replace an old heating system. 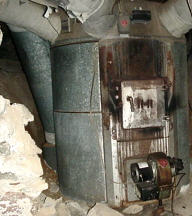 Old Gravity and Conversion Furnaces – they are sometimes referred to as ‘octopus’ or ‘elephant’ furnaces. This type of furnace was designed to burn coal or wood and later converted to natural gas. It may also have been converted to fuel oil before natural gas. It is very large, with a heavy fire pot and ductwork. Most do not have fans, although some may also have been retrofitted with a small fan. They are centrally located in a basement with a large return air duct in the middle of the house and several large heating ducts that radiate out to towards the outside walls of the house. They have a standing pilot that must be manually lit.

Older Forced-air Furnaces – that are 40 years or older typically have cast-iron (high mass) heat exchangers and simple cast iron burners. They do have a fan, smaller ductwork, and a standing pilot.

Natural Draft Forced Air Furnaces – the next generation of furnace has lighter weight heat exchangers, better burners and may have an automatic Intermittent Ignition Device (IID). They require a chimney or metal flue for natural draft combustion and venting.

Any furnace with a metal flue pipe and open front that pulls combustion air from the inside, heated space, cannot be more than about 80% combustion efficiency, and is much lower seasonal efficiency due to all the heated air lost up the flue during off-cycles. 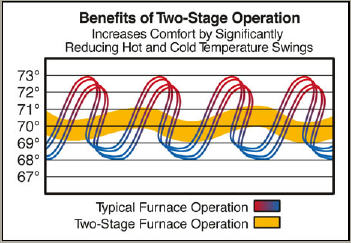 Condensing Furnace – has a plastic flue pipe; a second heat exchanger removes so much heat from the combustion gases that the temperature drops below 212F. The condensation results in additional heat called the ‘latent heat of condensation’   and a lot of water that must be drained away. Condensing furnaces have IID and no standby vent losses.

Multi-Stage Condensing Furnaces – in addition to the above, have multi-stage burners and variable speed distribution air fans to more closely match the furnace output with the space load. There can be a small efficiency gain over fixed rate units, but the biggest advantage is improved space comfort from more even temperatures.

Same steps as above with the addition of:

Note: The Fan Limit Control is also a safety; if the heat exchanger gets too hot, the Control shuts off the gas burner. This could happen with a failed distribution fan or plugged ductwork. 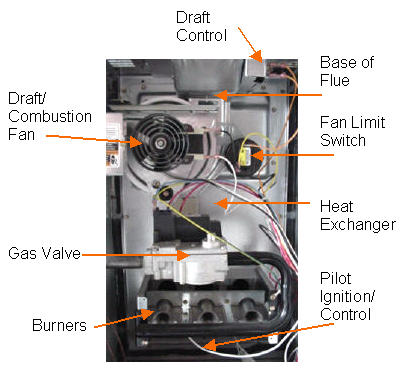 There were two retrofit options that were popular in the 1980’s and 1990’s that improved the efficiency of existing furnaces. An automatic Vent Damper and Intermittent Ignition Device (IID).

An automatic Vent Damper closes the flue during furnace off times. This reduces the off-cycle flue losses of heated air up the chimney. This can improve the effective annual efficiency by 5 – 10%. For more information see Vent Dampers.

An Intermittent Ignition Device can be added to most furnaces that have a standing pilot. However, they  proved to be mostly uneconomical and a maintenance problem. This is because the gas they saved was very small compared to the first cost of the equipment with installation, and they had a high failure rate. IID units installed as factory original equipment are highly reliable and are required by Federal law.

Although vent dampers and IIDs are still available, a furnace old enough to benefit from one should be considered for replacement. New furnaces, even the non-condensing units, have smaller flues, forced draft, and no open ‘draft hoods’, which means they loose less up the flue. Also, a vent damper could interfere with proper forced draft operation so it should not be installed on many newer furnaces.

Vent dampers are more common on boilers, which tend to last longer and have much higher replacement costs.

It is important for comfort and efficiency that a furnace be correctly sized for the space. Traditional practice has been to over-size a furnace and use about a 100,000 BTU furnace for any ‘average’ house, and maybe 200,000 BTUs for a large house.

Furnaces are the least efficient when they are warming up, and cooling down. Therefore, a furnace that is over-sized goes through more cycles and has a lower over-all efficiency. This cycling also produces more uneven temperatures in the space, reducing comfort.

The best way to size a furnace is with an accurate Heat Loss calculation of the house.

Notice: According to one directory, there are over 185 brand names of residential furnaces; this listing in no way is intended to be all inclusive or endorsing. It is only provided as a convenience to find several major brands that are available in most of the US and Canada.

Go to the Amana web site at www.amana-hac.com

Go to the American Standard web site at www.americanstandard-air.com

Go to the Bryant web site at www.bryant.com

Go to the Carrier web site at www.carrier.com/residential/en/us/

Go to the Coleman web site at www.colemanac.com

Go to the Heil web site at www.heil-hvac.com

Go to the Lennox web site at www.davelennox.com

Go to the Rheem web site at www.rheemac.com

Go to the Ruud web site at www.ruudac.com

The Gas Appliance Manufacturers Association (GAMA) is a national trade association whose members manufacture over 90 percent of all the residential, commercial and industrial gas appliances made in the United States. GAMA also represents manufacturers of certain products which use oil or electricity as their energy source.

The GAMA web site includes a membership directory with links to most US Manufacturer’s web sites.